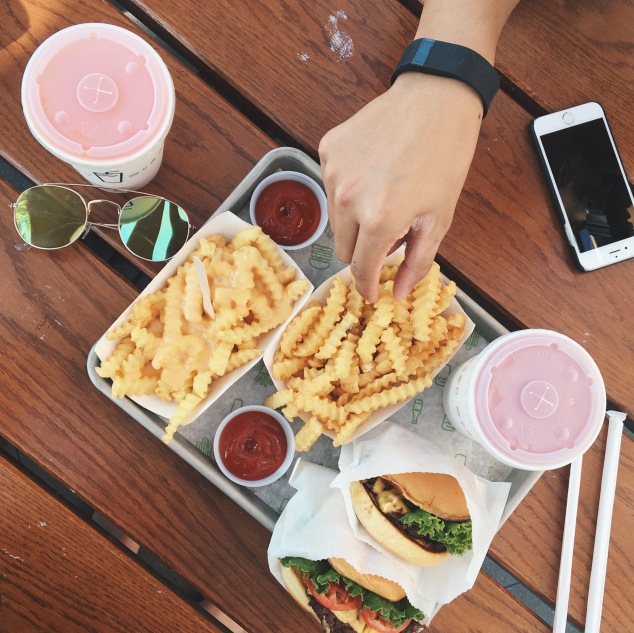 As a Californian, there is nothing that could ever top In N Out burger… but today, In N Out met it’s match. Whoever said the Shake Shack was better than In n Out was 100000% correct.

The Shake Shack in West Hollywood has become a largely popular and raved about fast food joint. Despite no drive thru, people flock to this corner location for it’s delicious, quality food. Thankfully, Shake Shack has it’s very own parking lot but given that we showed up around 4PM, parking wasn’t too hard to find. I wouldn’t be surprised if this place was bursting at the seams with people around noon or in the evening. Normally, they would have a super long line and it’d be nearly impossible to find seating, but given our arrival, we were lucky.

We got in line and ordered fairly quickly. We ordered Shack Burgers, one regular fries, one cheese fries, a strawberry mint lemonade, and a soda. All this came out to $24.50 for two. Normally, I’d flip my shit if I had to spend that much for fast food but I was going to give it the benefit of the doubt. We waited for our food, which did take quite a while but when it finally came out, it looked like heaven.

That first bite? HEAVEN. My suspicions were confirmed after that first bite. In N Out had met it’s match. It was worth all of the $24.50 that was spent. For someone who’s a devoted shoestring fry lover, these crinkle fries were the bomb.com. I would take my grumpy ol’ Asian parents and deal with WeHo traffic just for them to try it. It is 100000% worth the trip and I definitely would go back. Can we just replace all the Burger Kings in the valley with the Shake Shack????????

One thought on “Shake Shack > In N Out”