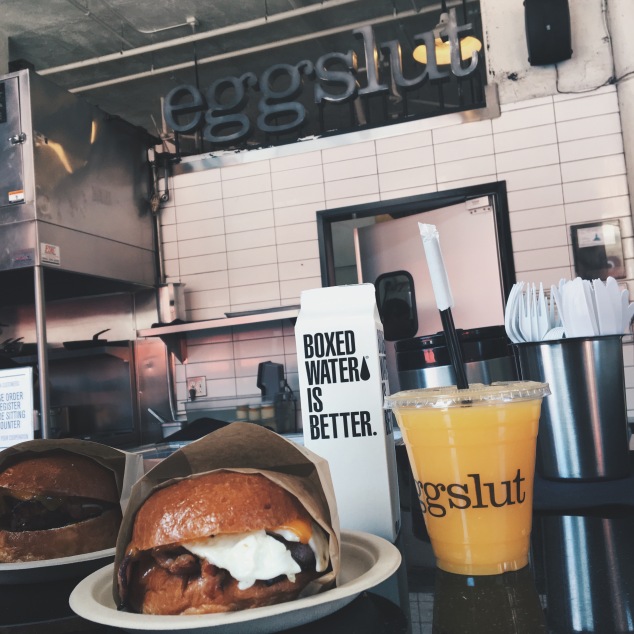 This scrumptious looking breakfast sandwich can be found in DTLA’s very own Grand Central Market. The eatery lies at the front of it all, closest to the sidewalks, of the market. While other eateries are stationed nearby (tacos, ramen, ice cream, juiceries, etc), Eggslut remains the most popular attraction of the entire market. On a Thursday afternoon, it wrapped around the back of the stand, but on weekends, the line is rumored to have ran all the way down the sidewalk. Despite being extremely busy, all the staff maintained positive attitudes and while you did still feel bad they’d have to work during a rush, they never faltered. I was able to speak to a man who I presume to be the owner of the establishment and he was super nice, friendly, and courteous. You can tell he’s a passion for what he does and he loves to hear feedback from everyone who decides to swing by.

Anyway, onto the logistics– Diane and I both purchased the Bacon, Egg, and Cheese sandwich ($7). It’s your basic bacon, egg, and cheese on a brioche bun– but I honestly have to say, that it was worth the wait, the line, and the money. It was sooooo good and you could taste all the flavors individually before they melted in your mouth. I did pay an extra $3.25 for my orange juice (which is pulpy, so if you don’t like pulp, don’t get it) so my total came out to be around $11 with tax.

As far as seating goes, there was plenty of seats when we went… but of course, for that aesthetic pic, we wanted a seat at the bar. That was no hopeless dream as plenty of seats opened up whenever someone new ordered, which was very nice. It gave everyone the same shot at experiencing and taking in the aesthetics as well as interacting with those who ran the eatery.

They do mostly serve breakfast-brunch oriented food, but I would not advise coming here if you could eat a horse. At the end of my meal, I was pretty content and didn’t too full or too shitty, but I wasn’t so stuffed that I was bursting at the seams. But worry not, if you do find yourself hungry, there’s lots of other places to eat nearby! I would definitely recommend this to anyone who’s in the area. *If you decide to visit the Broad, this place is only 3 minutes away 🙂